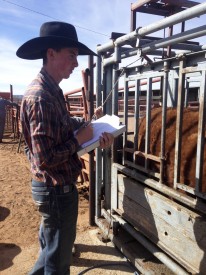 Animal Science students at Mesalands Community College recently completed a 120-day bull test at the New Mexico State University (NMSU) Agricultural Science Center in Tucumcari. This bull test gave students the opportunity to gain hands-on experience collecting essential data that will be used for the bull sale that will take place this weekend.

The bull test began in October, when 13 bull producers from Colorado, New Mexico, and Texas brought their nearly one-year old calves to the NMSU Agricultural Science Center. There were a total of 105 Angus and 15 Hereford purebred bulls that were evaluated. The major objective of the bull test was to collect data on the feed efficiency and growth factors of the bulls. As a result, the Animal Science students weigh the bulls to see how much they gained every 30 days. The students also had the opportunity to use a Grow Safe feeding system that was purchased by the producers. This data collection system gave the students individual feed intake of the bulls. Staci Stanbrough, Animal Science Faculty and Assistant Rodeo Coach at Mesalands, said this equipment and technology cost approximately $100,000 and less than 15 facilitates in the nation, have this sort of feeding system.

“The whole idea of the bull test is to put data in the hands of buyers. Therefore, producers are not just buying bulls on visual appraisal alone. There is that balance and our students did all of the data collection,” Stanbrough said. “Not only are our students networking and meeting cattle producers, but they are also getting involved with research at the university level.”

Stanbrough said the students also helped with maintaining the health program of the bulls. This included treating any sick animals and assisting the veterinarian with injectable wormers, that kills internal parasites. The students also helped with carcass ultrasound and breed soundness exams. Stanbrough said these bulls will be taken to various ranches and will be used to produce the next generation of calves.

Stanbrough said the bull test perfectly coincided with what she is currently teaching in her Animal Science classes at Mesalands, including: Beef Production, Livestock Evaluation, and Principles of Nutrition. She stated every aspect of bull testing fits in with what her students are learning in class.

Jessie Estill, Animal Science student and a member of the Mesalands Rodeo Team from Lovelock, NV, says he has learned a great deal about bulls from participating in the bull test. 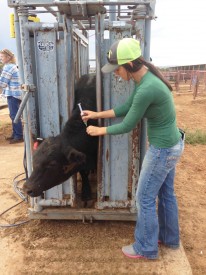 Payten Frost, Animal Science student and a member of the Mesalands Community College Rodeo Team from Snowflake, AZ, injects a wormer into the bull to kill any internal parasites at the NMSU Agricultural Science Center.

“My family owns a ranch and my dad is a genius when it comes to bulls. He has to know this kind of information to know which bulls to buy. I have a big spreadsheet of all of the information we collected during the bull test. I was talking to my dad about what everything means and what we are looking for like the bull’s initial weight, and weight for every 30 days and average daily gain,” Estill said. “Ms. Stanbrough is really big on hands-on experience! Our Livestock Evaluation class is pretty much top of the line. We are getting into the hands-on part of genetic evaluation and that’s getting really detailed.”

Estill said he applied for a summer internship with the NMSU Extension Office in Tucumcari. He says if he gets the internship he already has plenty of experience from the bull test and working with Marci Ward, Bull Test Director with NMSU. If he is selected, Ward would be his supervisor.

Natalie Gillard, Vice President of Academic Affairs at Mesalands, says Stanbrough has gone above and beyond to enhance the Animal Science Program.

“I want to give Staci the credit. She’s the one that has done all of the work. I think she has been an excellent addition to the faculty at Mesalands,” Gillard said. “She is showing students all of the various opportunities for future employment in this field. Students are gaining real-world experience, while building relationships through networking.”

Mesalands students will be helping with the bull sale on March 12, 2016 at the NMSU Agricultural Science Center. Stanbrough says the best part is getting to see all of the student’s hard work pay off with the sale.