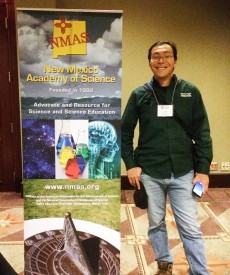 Ryan Pottenger, Natural Sciences student at Mesalands Community College, recently presented his research on the augmented reality sandbox at the New Mexico Academy of Science Research Symposium. His research was also published in the New Mexico Journal of Science.

Mesalands Community College is pleased to announce that Ryan Pottenger, Natural Sciences student, recently had his research “Modeling Bathymetry and Topography Maps Using an Augmented Reality Sandbox” published in the December 2015 issue of the New Mexico Journal of Science. The augmented reality sandbox is a tool that allows students and visitors to the Mesalands Dinosaur Museum and Natural Sciences Laboratory, mold allergy-free sand into hills and mountains. A computer then brings that terrain to life using a projector and an X-Box. There are only a handful of augmented reality sandboxes in science museums throughout the world.

“The College is very proud of our students and their ability to be successful on a regional and national level with their undergraduate research opportunities,” said Dr. Thomas W. Newsom, President of Mesalands Community College.

Pottenger also presented his research on the augmented reality sandbox at the 2015 New Mexico Academy of Science Research Symposium in Albuquerque, NM last November. He was accompanied by Gretchen Gürtler, the Director of the Mesalands Dinosaur Museum and Natural Sciences Laboratory and Dr. Axel Hungerbuehler, Natural Sciences Faculty and Museum Curator at Mesalands.