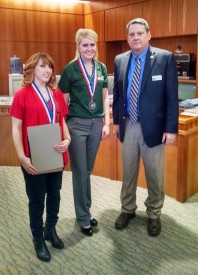 Students Sydney Abernathy and Ashlee Bradley, were joined by
Dr. Thomas W. Newsom, President of Mesalands, at the State Capital, for their selection to the 2016 All-State New Mexico Academic Team.

Mesalands Community College is pleased to announce that students Sydney Abernathy and Ashlee Bradley have been selected to the 2016 All-State New Mexico Academic Team. Each student will receive renewable full-tuition scholarships for up to four consecutive semesters, towards a bachelor’s degree at a participating New Mexico public university or college. They were recognized during a special award’s ceremony at the State Capitol Building in Santa Fe, earlier this month.

New Mexico has 18 community colleges that each nominates one to two students for the All-State New Mexico Academic Team. Thirty-one students in New Mexico were selected for this year’s team. This scholarship program is provided by the Phi Theta Kappa (PTK) Honor Society that recognizes and encourages the academic achievement of two-year college students. According to their website, PTK also provides opportunities for individual growth and development though participation in honors, leadership, service and fellowship programming.

“Sydney and Ashlee exemplify student success for their continued commitment to academic excellence and community involvement,” said Dr. Thomas W. Newsom, President of Mesalands Community College. “On behalf of Mesalands, we wish them both future success, as they continue to reach their educational and career goals.”

Both Abernathy and Bradley are members of PTK. Abernathy is from Rio Rancho, NM and has been a member of PTK since the fall semester of 2015. She says visiting the State Capitol and being recognized for this honor was very exciting.

“It was really neat to get to see all of the students from the different community colleges all gathered together,” Abernathy said. “We also saw some of the 30-day hearings that were going on during that time.”

Abernathy is currently a tutor at the Math-Science Learning Center at Mesalands. She is majoring in Pre-nursing and will be graduating with an Applied Science Certificate in Pre-Nursing in May. Abernathy plans to begin the Bachelor of Science in Nursing (BSN) program at West Texas A&M University next year.

In the fall, Bradley was one of three Dual Enrollment Students inducted into PTK from Tucumcari High School, for the first time in the College’s history. Bradley says she is thankful for receiving this scholarship to help her pay for medical school.

“Being able to pay for college using this scholarship helps a lot because if I do go to medical school, that’s between $16,000 to $20,000 out-of-pocket, on my own,” Bradley said. “Earning these additional scholarships will definitely make it a lot easier to pay for medical school.”

Bradley plans to become a sports medicine and orthopedic physician and surgeon. She has applied plans to the combined BA/MD program through the School of Medicine at the University of New Mexico. She says only 28 students are selected for this program each year. She is also applying to Eastern New Mexico University, Highlands University, and West Texas A&M University.

In May, Bradley will be graduating from both Tucumcari High School and Mesalands. She will be receiving an Associate’s Degree in Liberal Arts and Certificates in Phlebotomy and Certified Nursing Assistant (CNA) from Mesalands. She says she is also on track to being the valedictorian of her high school graduating class.

Bradley said she enjoyed attending the award’s ceremony and said there was a piece of advice shared that she found very beneficial.

“One thing that they did mention at the ceremony in Santa Fe was to applaud yourself for five minutes and then keep going,” Bradley said. “This is only the beginning.”